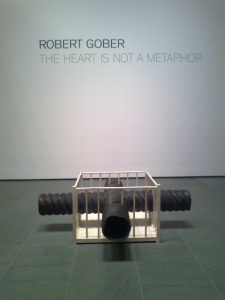 Finally I went to the show, Robert Gober: The Heart Is Not a Metaphor at MOMA. It will end tomorrow.
The Heart Is Not a Metaphor is the first large-scale survey of Robert Gober’s career to take place in the United States. Gober (American, b. 1954) rose to prominence in the mid-1980s and was quickly acknowledged as one of the most significant artists of his generation.
This is the first time I saw his works with my own eyes. I had seen his works with photos and I hadn’t been interested in. I had thought that they were too conceptual and dry. But real works were really good. They were conceptual yet sensitive and poetic. They were opposite of my impression I had before. This is a lesson for me to learn that real works and their photos are sometimes different!